New endleaves were made from calfskin parchment. The endleaves not only protect the opening and closing leaves of the original manuscript but play an important role in the mechanical work of the binding as it is opened by a reader.

The endleaves used in the binding for MS 251 have joints of alum-tawed skin sewn on to the bifolium of parchment so that the internal joint is at once flexible and strong, and therefore able to transfer the levering action of the board being opened into the spine of the book. Fine linen thread is used to carry out this sewing.

Great care is taken to ensure that the stitches fall exactly on the fold, without appearing in the joint of the finished endleaf. A paper waste-sheet is incorporated into the structure to protect the parchment from becoming soiled during the rest of the binding process, and is removed just before the joints are put down.

A carefully pared alum-tawed joint and a paper waste-sheet are tipped on to the parchment bifolium along the spine-fold.

The main sewing holes are pierced through the parchment, alum-tawed skin and waste sheet in such a way as to avoid the holes showing in the finished joint.

Smaller holes are added at regular intervals between the main sewing stations to allow the adhesive attachment of the alum-tawed joint to be reinforced with linen stitches.

When the endleaves are completed, the alum-tawed joint is securely attached with stitches as well as adhesive, the stitches sit neatly in the fold…

…and are invisible when the joint is opened.

The manuscript was resewn to the original marking up on double linen cord supports, and with thinner single cord supports for the kettle stitches (the point at which the thread leaves one quire and is taken to the next).  Parchment leaves of this weight are sewn with seaming twine, which is much heavier than the threads used for modern bookbinding.  The gauge of the twine is carefully selected to provide exactly the right amount of ‘swell’ in the quires so that the book takes on a natural round which will not collapse with use. 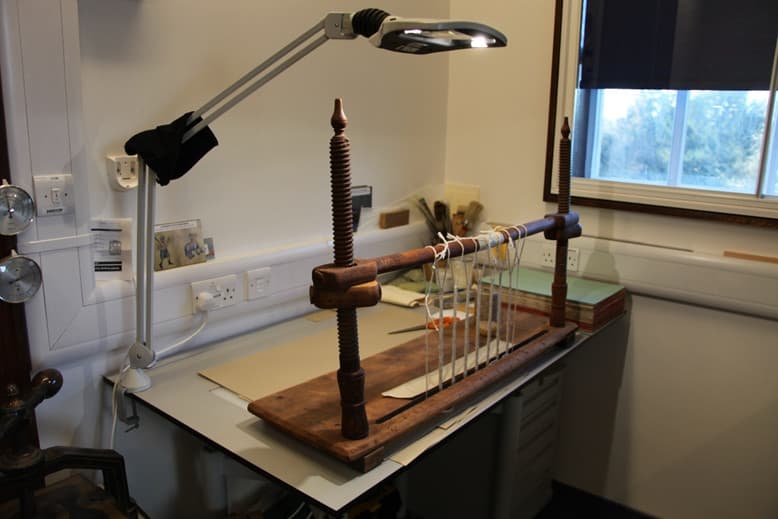 Sewing is carried out on a traditional sewing frame which holds the cords taut. The sewing follows medieval and early modern examples of bookbinding in using a herringbone stitch.  In this style of sewing, the thread passes along the inside of each quire, exiting at the sewing hole between the pair of cords at that station.  A stitch is then worked around each of the two cords and pulled tight before the thread is passed back into the centre of the quire.  This process is repeated at every sewing station.  When subsequent quires are attached the same pattern is followed, but in addition to passing round both cords at each sewing station, the thread is passed under the stitch for the quire below before re-entering the quire being sewn.

Sewing frames have been in use since at least the twelfth century.

To form the herringbone stitch, the needle exits between the paired cords…

… and links behind the completed stitch of the quire below…

…before re-entering the quire being sewn.

This method creates a robust but very flexible structure which is the foundation for the whole binding.  It took 33 metres of thread to complete the sewing of MS 251.  Each quire is gently but firmly compressed with a wedge-shaped wooden stick before the next is added to ensure that the all-important swell is a result of the thickness of the sewing thread rather than the squashy effect produced by trapped air. Narrow strips of archival paper were folded round the spine of each quire of MS 251 before it was sewn in order to protect the original parchment from contact with adhesive used later in the binding process. 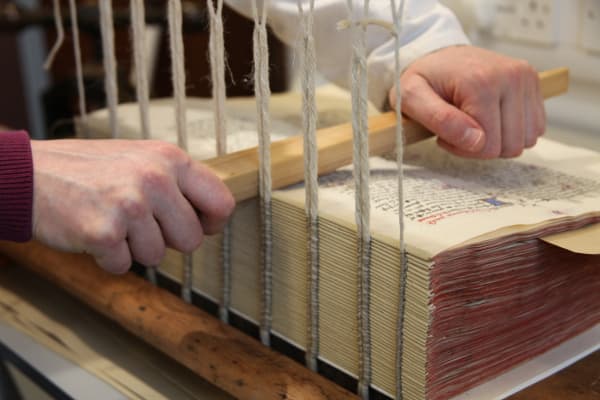 Every quire is compressed after it is sewn to expel air.

Well-seasoned, quarter-sawn oak boards were cut and shaped to fit the resewn manuscript snugly.  The inner sides of the spine edges were bevelled to accept the swell produced by the sewing thread and encourage the textblock to form a gently rounded shape when the boards are laced on.  The outer faces were then gently bevelled to the familiar cushion shape associated with original manuscript bindings of this type.  This gives a lighter appearance whilst allowing substantial boards to be used to keep the parchment leaves flat during changes in the relative humidity of the surrounding air.  Quarter-sawn boards, although a less efficient way of producing planks than the now more common plain-sawing of timber, are chosen for their ability to resist warping. 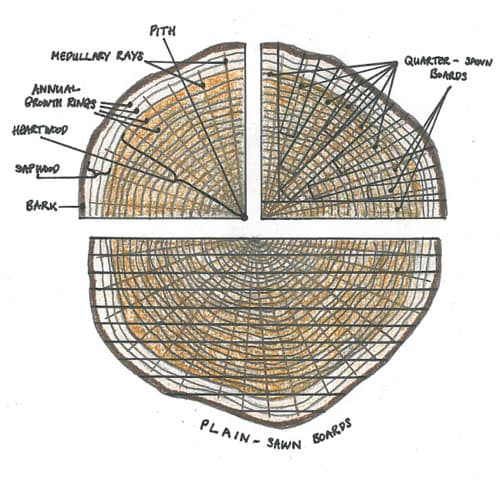 Diagram showing the parts of a tree trunk and the cutting patterns for quarter- and plain-sawn timber. 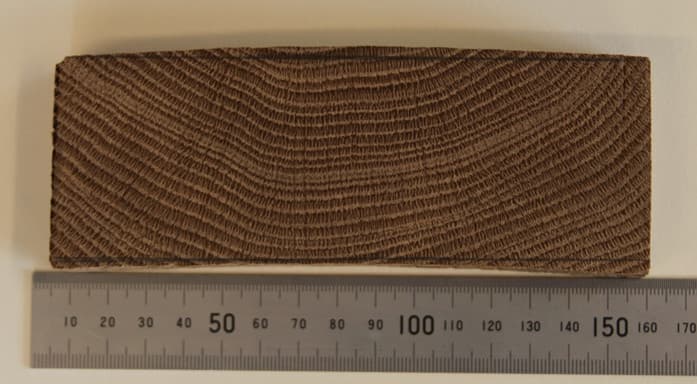 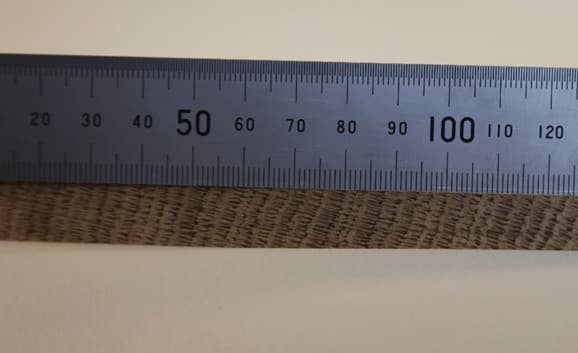 A comparison of different cuts of oak.  Note how the plain-sawn timber has warped and the quarter-sawn board has stayed flat. 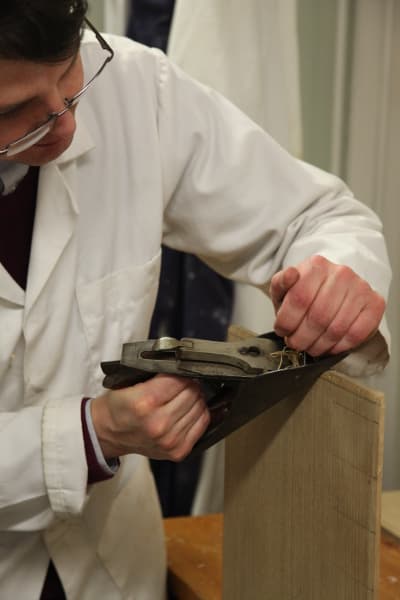 The boards are shaped with a plane. 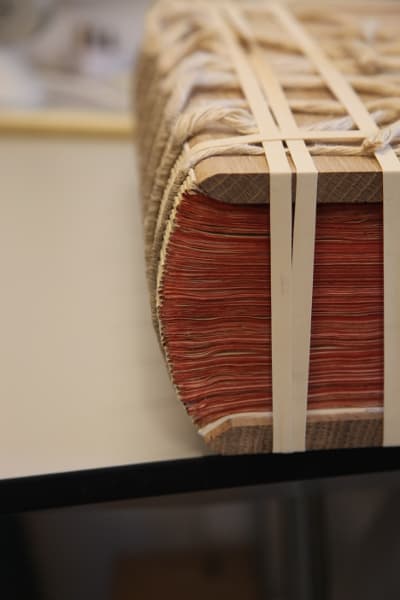 Bevels along the inside of the spine edge of each board accommodate the swell from the sewing thread and encourage the textblock to form a natural round shape – without the need for any hammering. 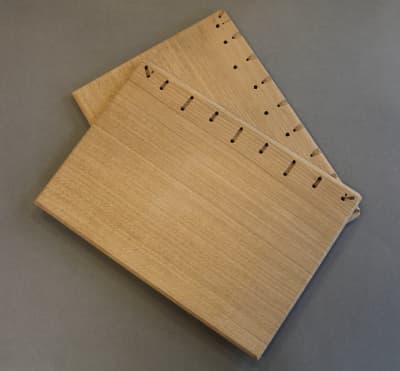 The shaped, drilled and channelled boards ready for lacing on to the manuscript textblock.

A loose, slotted spine-liner of aero-linen was cut to cover the spine panels and help transfer the movement of the opening board into the spine in the finished binding.

The aero-linen spine liner is shaped to fit over the raised bands accurately to protect the spine from adhesive and help to transfer board leverage across the spine in the finished binding.

Primary endbands were worked through the liner, to hold it firmly in place, over linen cord cores with the same twine used for sewing.  These endbands are structurally important to the binding and are tied down in every quire of the textblock.  The back-bead stitch used produces a robust but flexible endband which reinforces the shape of the spine and controls the opening arch.

The endband slips are laced into the boards to give extra strength at a weak point of the binding. 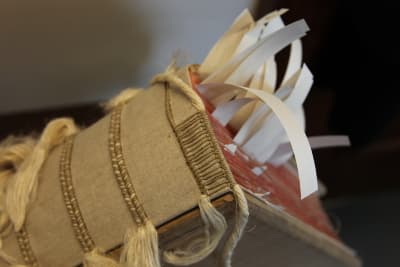 Paper slips mark the centres of the quires so that they can be found easily when sewing the primary endbands.

The primary endbands consolidate the shape of the spine and help to control the opening arch of the book.

The shaped boards were drilled and channelled to allow the ends of the sewing supports (the ‘slips’) to be laced through and pegged in place with wedges of alum-tawed skin. 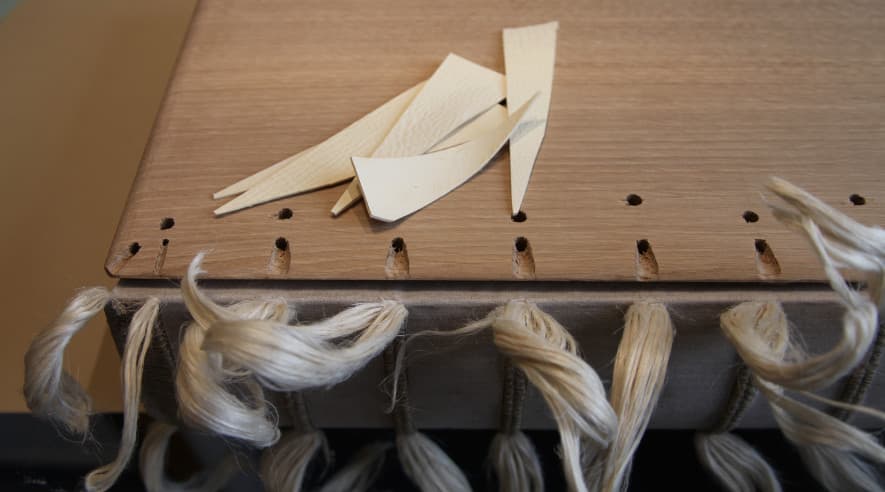 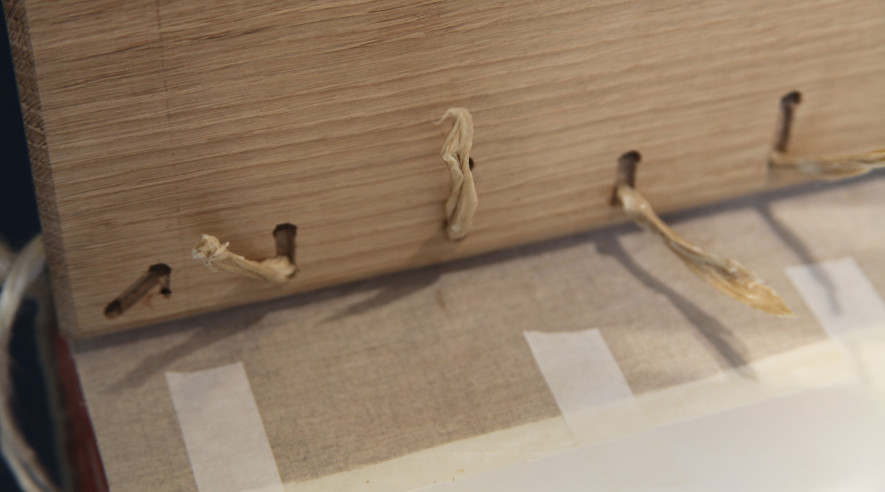 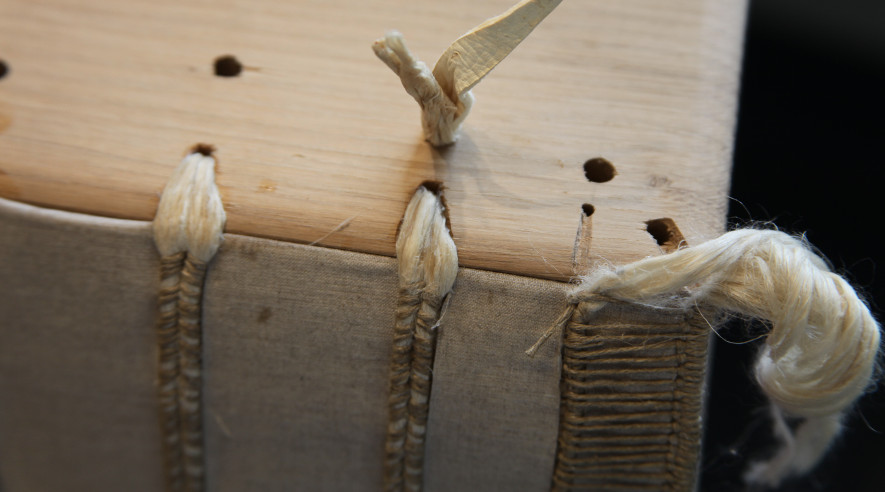 …and exit through the second set of holes along with an alum-tawed wedge. The tightness of the boards in the joint is carefully adjusted before the cords and the wedges are pulled up until they are tightly fixed in the holes. The excess cord and alum-tawed skin is trimmed away flush with the board. 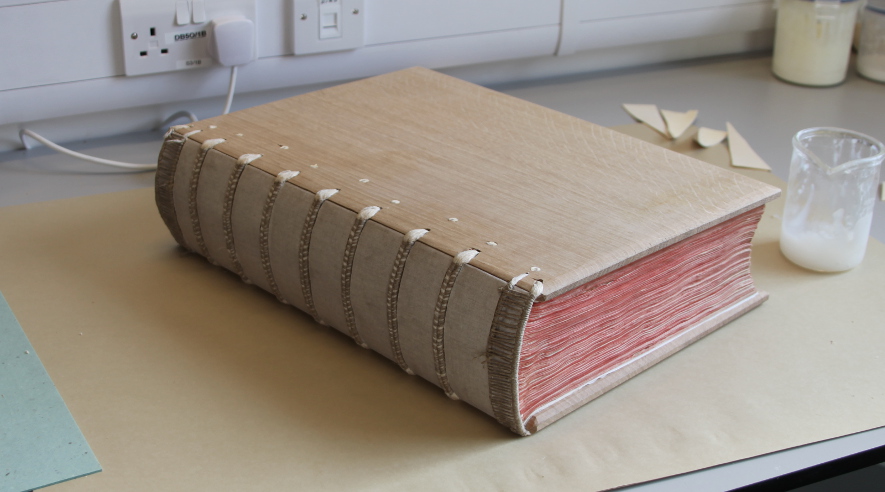 Careful adjustment of the boards during lacing-on allows them to sit comfortably on the manuscript textblock.

The textblock of the manuscript is protected from being soiled during covering by a wrapper of clean paper, one for each half of the manuscript.  A sheet of Melinex at each end of the book prevents moisture from the paste used to adhere the covering skin penetrating the boards and cockling the parchment.  Covering the textblock in two halves like this allows for greater control in manipulating the book when turning in the skin at the head and tail of the spine. 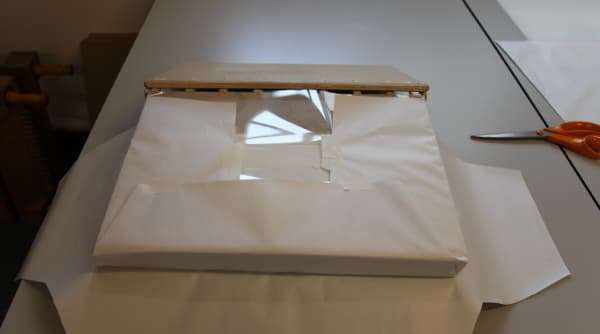 The manuscript is protected from soiling during covering with a ‘cap’ of paper and sheets of Melinex.

The manuscript was covered with alum-tawed calfskin chosen for its durability, strength and flexibility.  The skin was pared to fit the book comfortably and adhered with purified wheat-starch paste.  It is important not to over wet or handle the pasted alum-tawed skin too much as it can mark easily and excess moisture can cause discolouration. 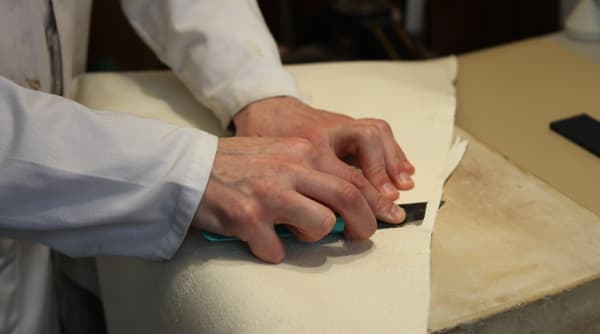 A razor-sharp knife is used to start the paring of the covering skin, which is thinned down in the areas where it is turned in around the boards and at the head and tail of the spine.

The skin has to be slit to turn in around the endband lacings and the length and position of these cuts has to be accurately judged.  The ends of the slits are punched with small round holes to help prevent the cut tearing further during future use of the binding.  A paper guide for each of the four lacings and cuts is a good way to prevent costly and frustrating mistakes.

When everything is in order with the covering the book is put into a press and tied up with cord along the bands to dry.  MS 251 required just over 31 metres of cord for this process. 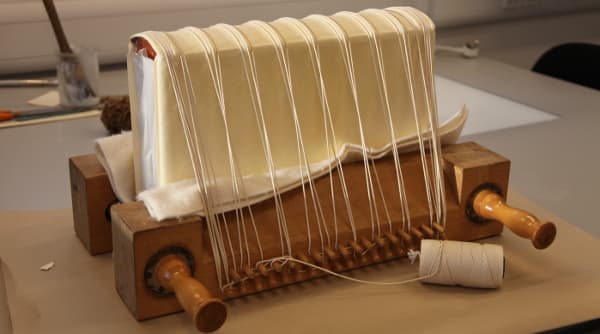 There is no escape for a binding which needs to dry…!

When the covering had dried thoroughly the book was opened carefully from both ends to flex the spine evenly and the opening arch could be seen clearly.

Careful opening and exercising of the new binding’s spine allow the opening arch to be assessed.

Secondary endbands were worked through the covering skin on the spine and around the primary endbands to connect the two elements.  Extra cores were added to fine-tune the arching of the spine.

The secondary endband sewing is worked in doubled white and blue threads over two secondary cores of cord. The sewing starts from the inside of the binding from where both threads are taken onto the outside of the spine.

…but when taken to the end of the spine they are passed under the loop of blue thread to prevent the stitches from spreading out by forming a chevron.

The same steps are repeated, keeping the stitches tightly packed…

…and as the work proceeds, the chevron pattern becomes clear. 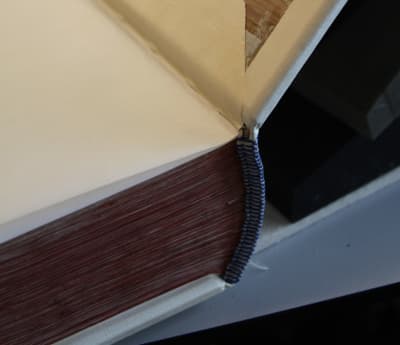 Putting down the joints with the board at an angle allows the board leverage to be adjusted.

The spine-lining and joints both help to spread the leverage of the board into the spine when the book is opened so that the leaves flow open. 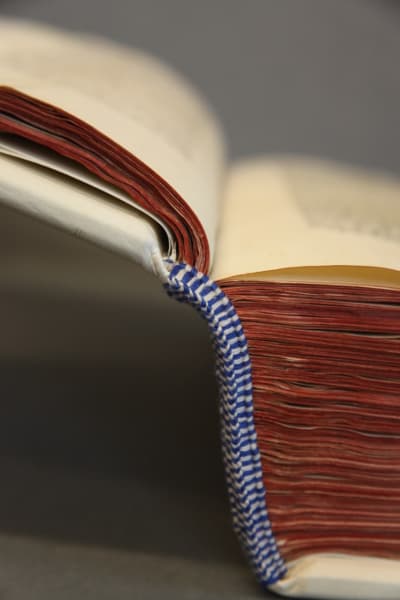 As the board opens, the leverage is transferred into the spine, which also starts to flex, so that the book flows open from the spinefolds of the leaves.

The binding was finished with a traditional pattern of blind lines to echo the design on the book shown in the presentation miniature. 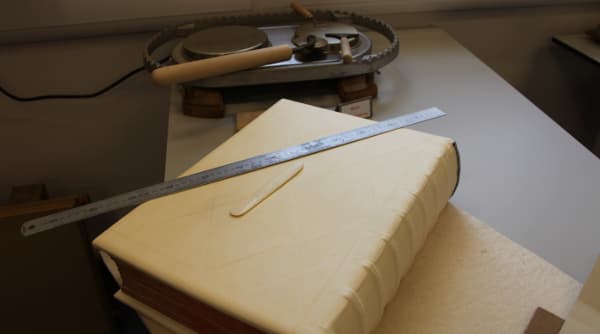 The ends of the lines for the blind-tooled diaper design are marked with a bone folder and rule before the pattern is put in permanently with hot brass tools shown here on the finishing stove in the background.