Condition of the manuscript

The manuscript’s leaves have survived in very good condition, despite some evidence of water-damage at the end of the book.  However, the original binding had been removed and replaced in the eighteenth century.

The gold-tooled spine of the tanned calfskin binding put on to MS 251 in the mid eighteenth century.

During the eighteenth-century rebinding campaign, the original sewing, endbands and boards were removed and the textblock was resewn quickly on six single cord supports.  No time was spent in repairing damage to the spine-folds of the leaves, and fragments of the original sewing thread were discovered to have been left in the folds during the recent conservation work. 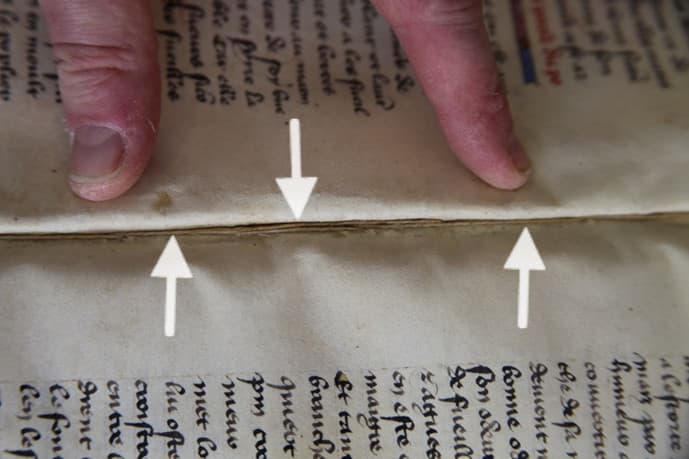 A fragment of the original sewing thread survives alongside the eighteenth-century sewing.

The free edges of the leaves were trimmed in the eighteenth century to make them even and allow red pigment to be applied.  This has resulted in the loss of some headings and occasional dribbles of red colouring seeping into the margins.

The angel and the man carrying a basket were lucky not to lose their heads when the edges of the leaves were trimmed – the roman numerals did not fare so well.

The spine of the book was hammered in to the familiar round shape over sharp wooden ‘backing boards’ to produce 90 degree ‘shoulders’ to accept the pasteboard boards common to eighteenth-century bindings.  The spine was then given a heavy coating of hot hide glue to preserve the shape.  Both the hammering and the application of glue distorted the spinefolds of the parchment leaves, and unrepaired holes allowed the warm glue to seep into the spine margins of several gatherings.

Note the sharp 90-degree fold of the two bifolia on the right.  These leaves are from the beginning of the book, but even folds towards the centre of the textblock had been distorted by heavy-handed hammer-blows. 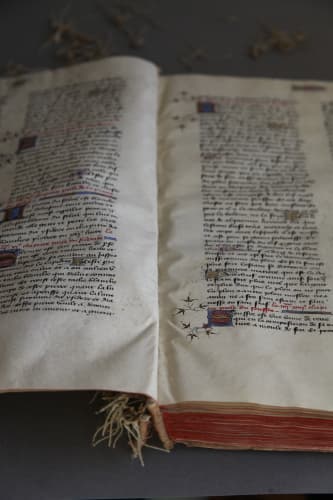 Raking light shows distortion in the spine margin and is a permanent record of exactly where the hammer-blows fell.

Hide glue seeped into the spine margins through unrepaired holes in the spinefolds, sticking leaves together, hardening the parchment and leaving areas of discolouration.