From Vandalism to Reconstruction

The vandalism inflicted on illuminations took many forms. Precious materials were scraped off, images were censored, defaced or cut out of manuscripts. The latter activity reached unprecedented levels c.1800. After the French Revolution, Napoleon’s campaigns and the secularisation of religious houses, the art market was flooded with manuscripts and their images were rediscovered as the ‘treasures of a lost art.’ Removed from the volumes, the illuminations were pasted into albums, framed as paintings and reproduced in publications, bringing medieval art to wider audiences and promoting the revival of illumination as an art form. This, in turn, inspired the restoration of originals and the creation of forgeries. Today, most manuscript conservators focus on preservation by consolidating loose pigments, but avoid filling in paint losses or removing modern retouches. Mathematical algorithms and digital technologies help reconstruct damaged and overpainted images virtually. 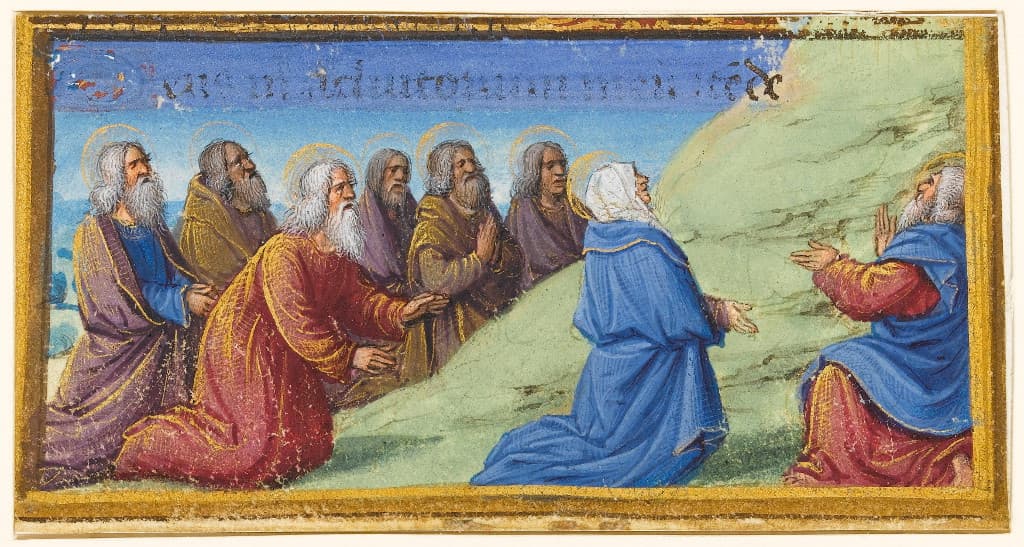 Kneeling at the foot of the Mount of Olives, Mary and the disciples look up in astonishment. This fragment was once the lower part of a page; the right-hand border probably showed Christ ascending to Heaven. The French royal painter and illuminator Jean Poyer often extended the pictorial narrative into the margins. This proved irresistible to the vandal who cut this border from the original manuscript and transformed it into a painting. He added the top frame over a line of text and concealed another line beneath a layer of ultramarine blue sky. Poyer in contrast had used azurite for the sky. 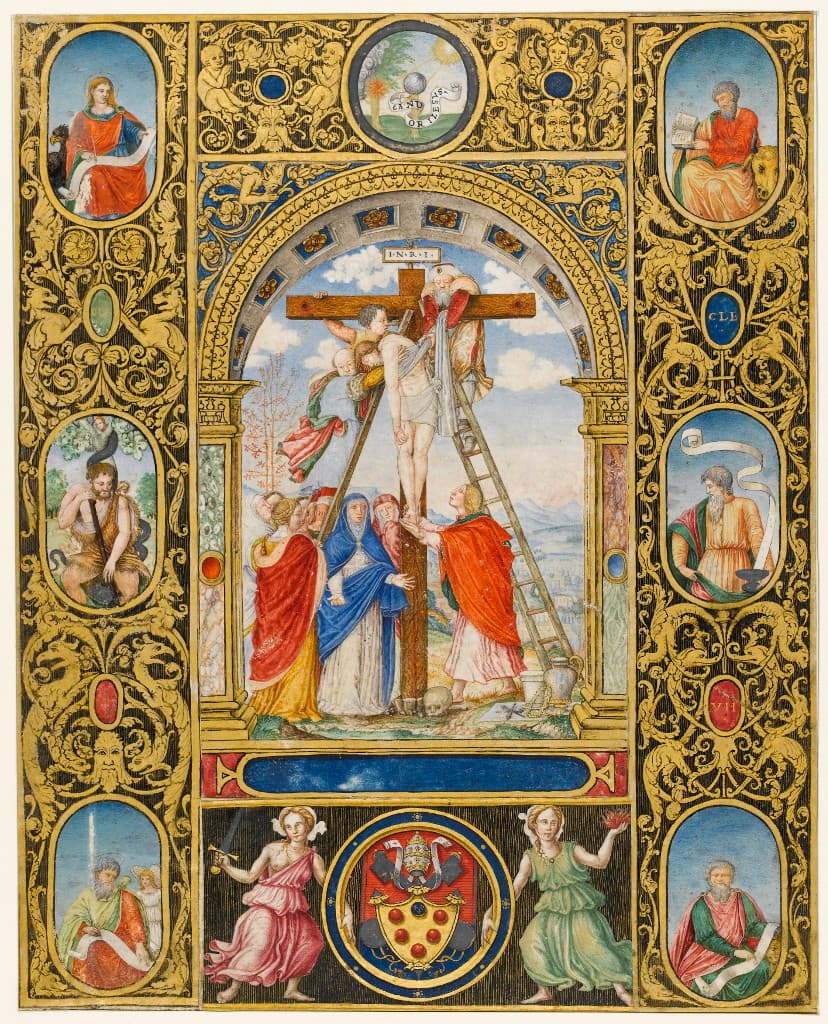 Collage of fragments from the Missals of Pope Clement VII
Italy, Rome, 1523-1534

This ‘painting’ is a montage of five parts: Christ’s Deposition; Justice and Charity with Clement VII’s arms; his device, a crystal sphere, and motto ‘Innocence unharmed’; side borders with the Evangelists, a prophet, and Adam beneath the Tree of Knowledge. The pieces come from two Missals commissioned by Giulio de’ Medici after he became Pope Clement VII in 1523. Looted during Napoleon’s sack of the Sistine Chapel in 1798, the Missals were reduced to fragments, then reused in collages. The original text beneath the Deposition was covered with azurite, and the borders received added gems, and CLE. and VII, advertising the prestigious provenance. 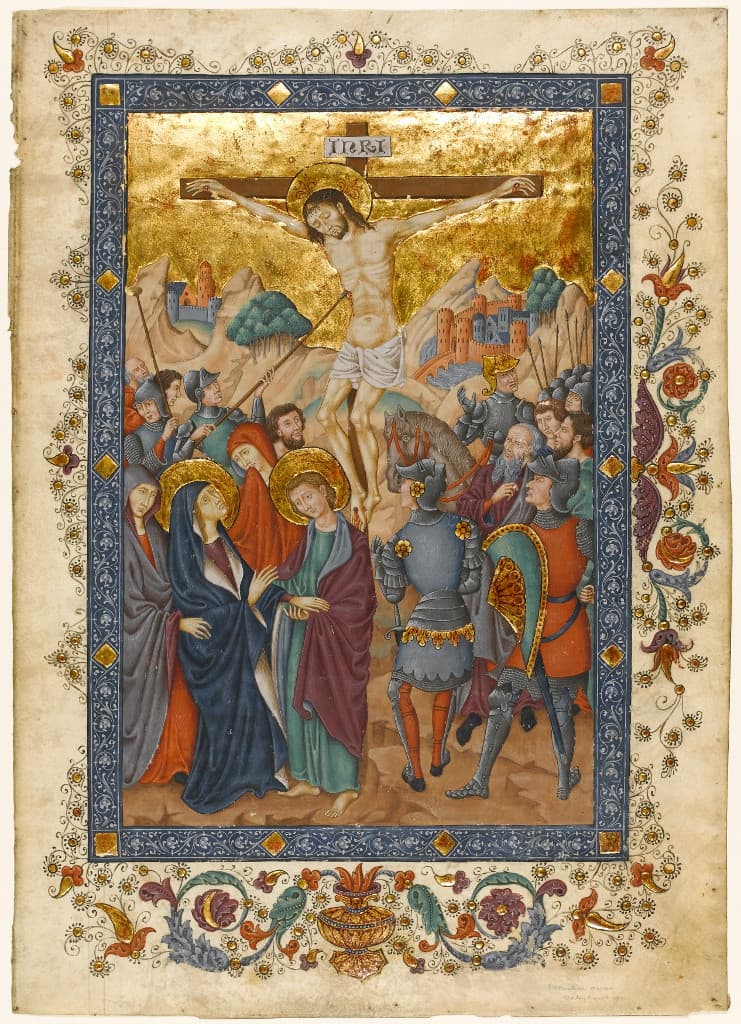 This Crucifixion is a modern work painted on a page from a fifteenth-century Italian Choir book. Reusing original manuscript leaves was a common strategy of the Spanish Forger. Originally thought to be a 15th-century Spanish painter, he was unmasked in 1939 as an artist working in Paris in the decades c.1900. This Crucifixion displays his signature style, with elaborate costumes, theatrical settings and dramatic expressions. It also contains his favourite greens – copper-arsenite (‘Scheele’s green’), first synthesised in the late 18th century, and copper-acetoarsenite (‘emerald green’), produced c.1822 – as well as zinc white, first available in the 1830s. 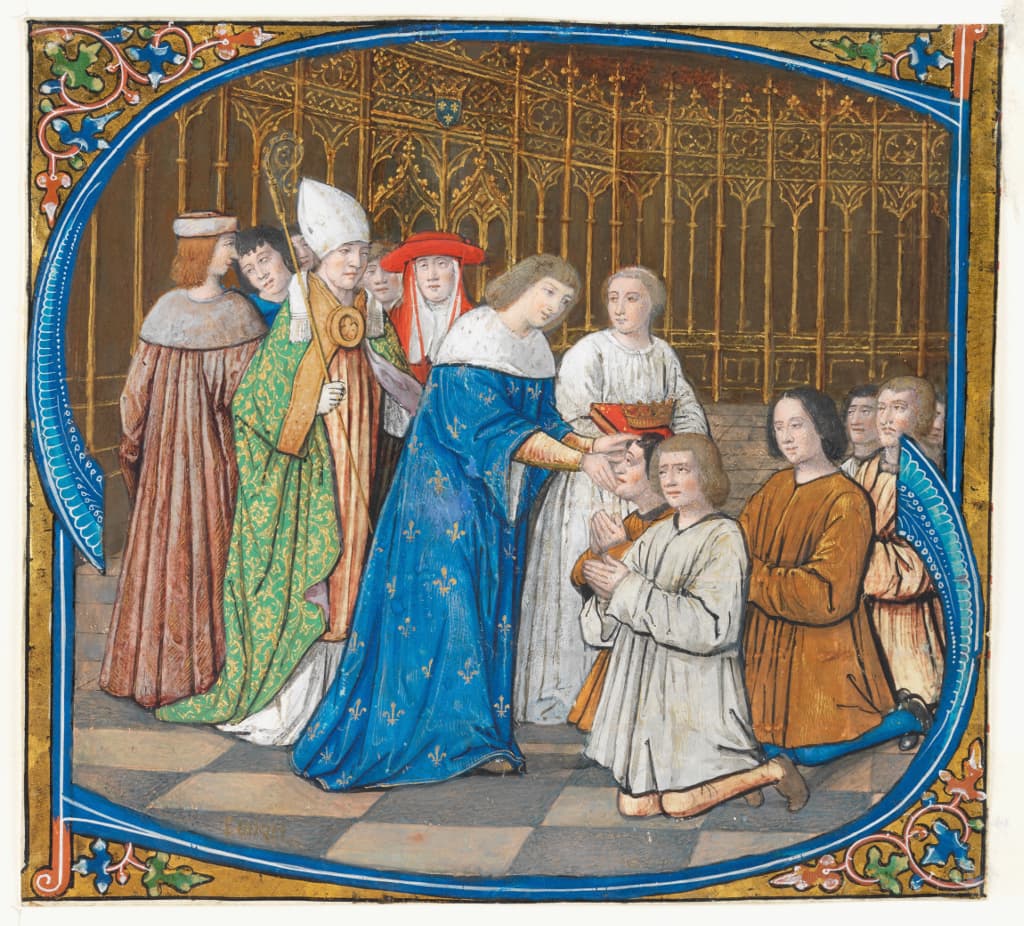 Louis XII of France (1498-1515) extends his healing touch to people suffering from scrofula, a type of tuberculosis. This initial comes from a manuscript commissioned by Louis and his queen, Anne of Brittany, but vandalised c.1840. The damaged azurite areas in the king’s robe and the letter were repainted in cobalt blue, first used in the early 19th century. The clumsy restoration aimed to enhance the image’s aesthetics and value, as did the addition of the name ‘Foquet’ in the lower left. The celebrated illuminator Jean Fouquet (1420-1481) played no part in the creation of this image. 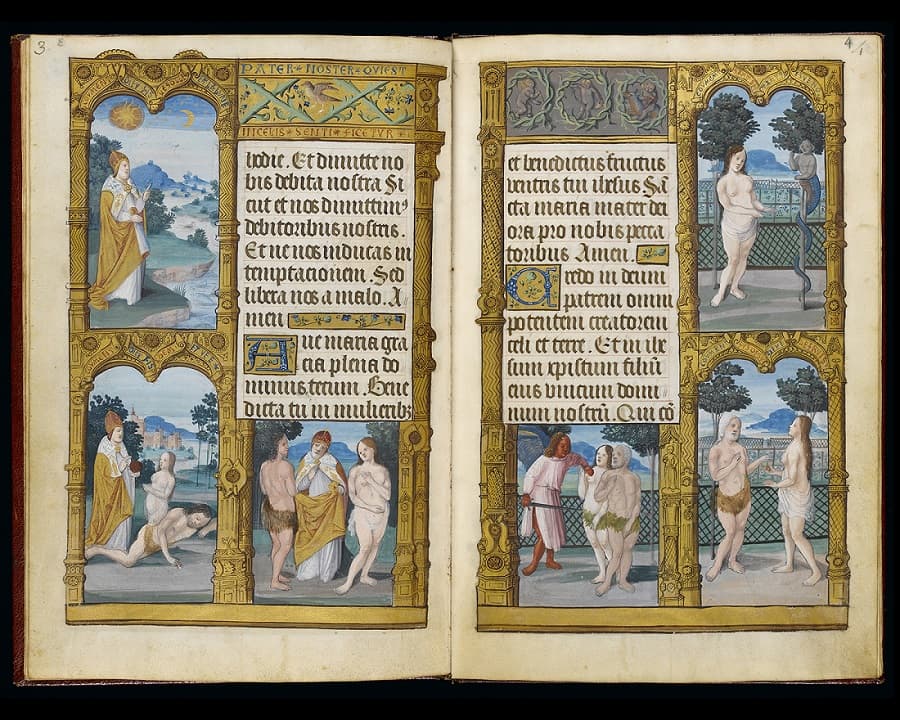 The French Queen Anne of Brittany (1477-1514) commissioned this ABC for her five-year old daughter, Claude (1499-1524), and taught her to read from it. Containing the alphabet and the universal Christian prayers, the Primer is essentially a picture book. Here, we see the Creation, Temptation and Expulsion of Adam and Eve from the Garden of Eden. Free of shame until they tasted the forbidden fruit from the Tree of Knowledge, the couple were painted naked. But their nudity offended the puritanical sensitivities of an early modern owner: Eve acquired a veil and Adam a leafy skirt.

Most conservators today preserve manuscripts in their current condition and would not remove Adam and Eve’s skirts. But experts in Cambridge’s Department of Applied Mathematics and Theoretical Physics restored the images virtually, applying methods based on Partial Differential Equations. The virtual restoration brings us closer to the beauty and meaning of the original images. To find out more about it, explore Claude of France’s Primer at www.fitzmuseum.cam.ac.uk/illuminated

Bequeathed by Viscount Fitzwilliam in 1816
ILLUMINATED: Manuscripts in the Making