The trade in colours

Artists made some pigments in their workshops and bought others from merchants or apothecaries, who sold colourants with medicinal properties. Many pigments extracted from plants were available locally, for instance the yellow made from weld, the green from buckthorn and the blue from woad. Others were sourced from across Europe: blue azurite was mined in Saxony and Hungary, red kermes was produced along the Mediterranean coast.

The most costly pigments were traded across continents. The commercial revolution of the 13th century made colourants widely available and coincided with the spread of the Mongol Empire which facilitated trade from Central Asia to Europe. Blue indigo and red Brazilwood travelled from South-East Asia along the silk route. The most expensive pigment was ultramarine blue, derived from the semi-precious stone lapis lazuli mined in the mountains of Badakhshan (in modern-day Afghanistan). 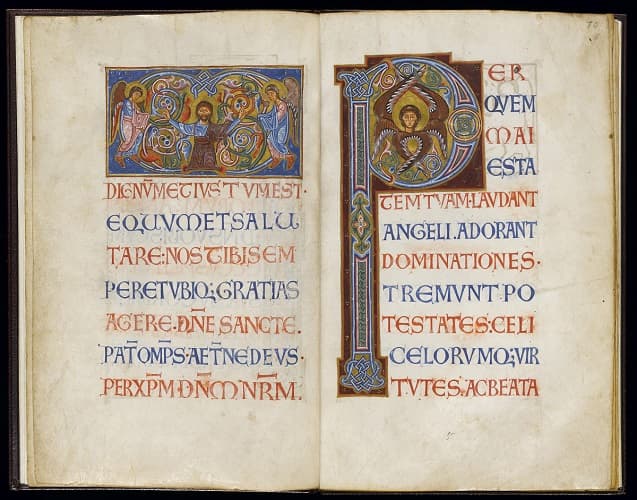 Christ with Angels and Seraph

This is one of the earliest manuscripts produced in the Latin Kingdom of Jerusalem, established in 1099 after the First Crusade. It was made for the Church of the Holy Sepulchre by Western craftsmen who accompanied the Crusaders. They combined Italian, English, Byzantine and local motifs and materials into their style and palette. The impressive range of colourants includes gold leaf, vermilion, red lead, yellow orpiment and pararealgar, organic dyes in pink and purple areas, indigo and ultramarine – two blues that became increasingly available after the Crusaders’ conquest of the Holy Land and the increased access to Asian trade routes. 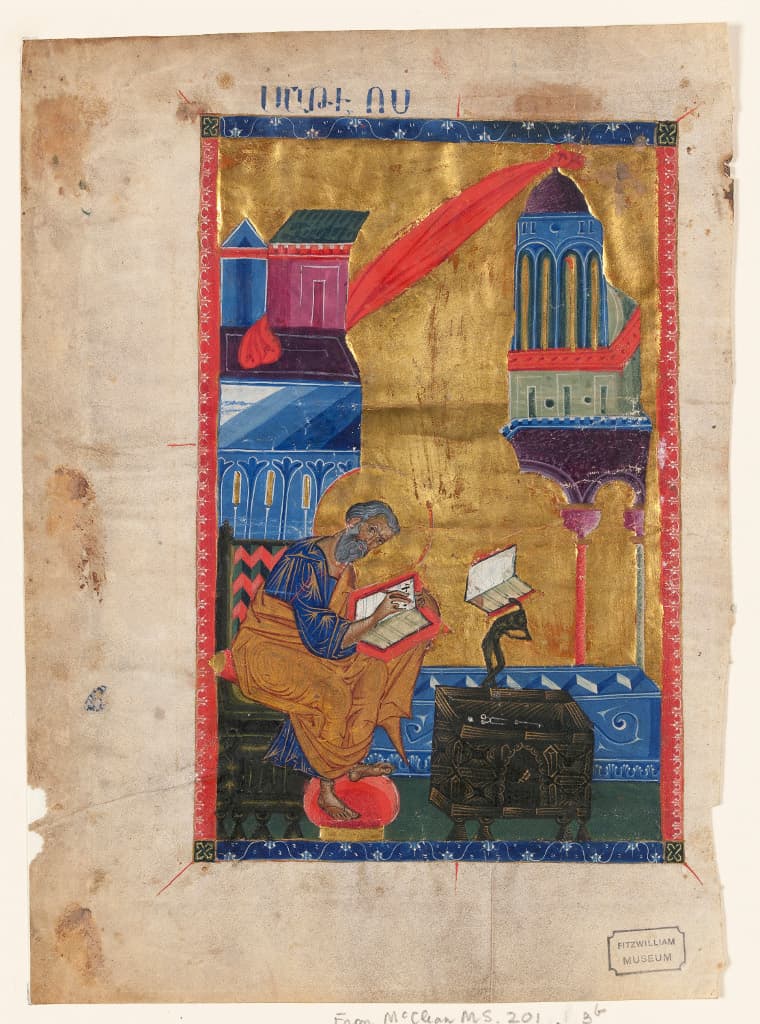 Leaf from the Gospels of Marshal Ōšin
Cilicia, Sis, 1274

This leaf belonged to the Gospels made in 1274 for Marshal Ōšin, a member of the Armenian royal family. It represents the innovative manuscripts made in Sis, the capital of Cilicia, which drew on Crusader, Latin and Byzantine traditions. The palette boasts the abundant gold, saturated purples and bold pinks typical of these princely commissions. Green earth features in addition to the common green mixture of indigo and orpiment, while realgar replaces orpiment as the main yellow. Two binders were employed: the resin gum Arabic and egg yolk, rare in Europe, but extensively used in Armenian illumination.

Fitna Carries an Ox up to Bahram Gur

The Persian poet Nizami (d. 1209) told the story of the Sasanian ruler Bahram Gur and the beautiful slave-girl Fitna. Here, we see their reunion; Fitna has grown very strong during their separation. Probably painted in the Persian capital Qazvin, the image combines motifs and materials that travelled along the Silk Road. The Chinese robes are painted in ultramarine from nearby Afghanistan and patterned in shell gold. Pure vermilion red, minium orange, verdigris green and orpiment yellow are juxtaposed with mixtures. Indigo is combined with orpiment in the foliage and with an insect-derived pink in the violet mountains.