Rendering three-dimensional forms on a flat surface is a challenge, but not a priority for all painters. Many medieval artists – like many Modernists – ignored it. Others took it up, focused on the human figure and attempted to convey the body beneath the drapery. Some illuminators tinted dark areas in colour washes, leaving the bare parchment as highlights. Many indicated folds and ridges with black and white lines. During the 13th century, this graphic approach was supplemented by a new painterly technique: gradations of colour created smooth transitions between highlighted and shaded areas. By the 1280s, French and English illuminators had mastered three-dimensional modelling, conjuring up volume and plasticity not seen elsewhere until the frescos painted c.1300 by Cavallini and Giotto in Rome, Assisi and Padua. From the 1320s, some artists employed tiny brush strokes in a pointillist technique anticipating that of the Neo-impressionists in the late 19th century. 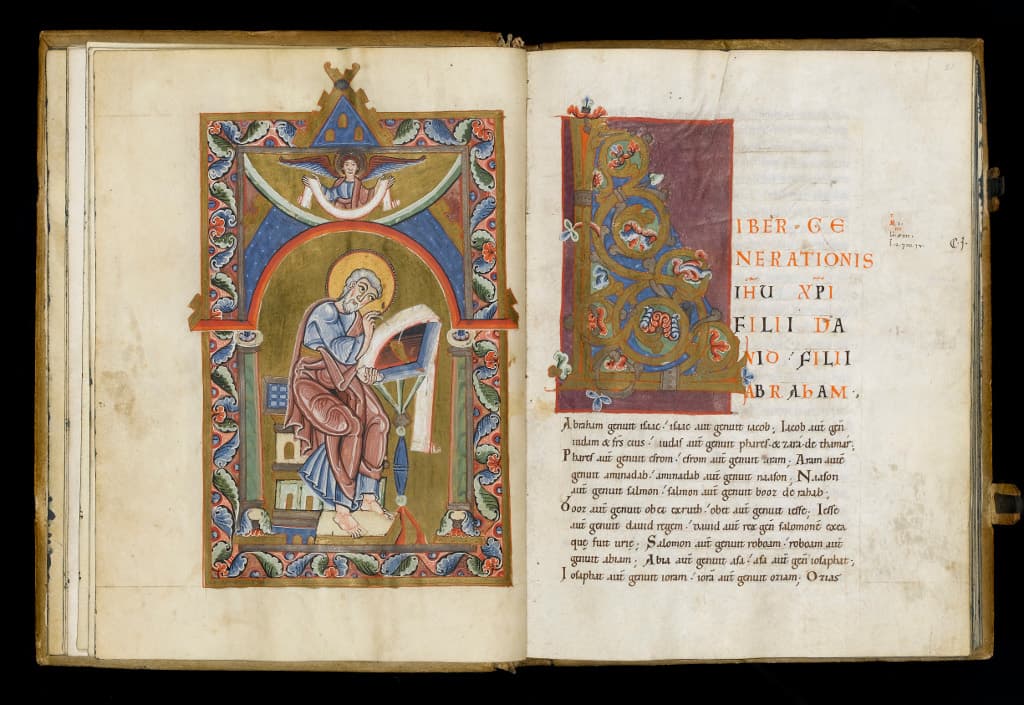 St Matthew’s image opens his Gospel. He is enveloped in blue and pink fabrics. The blue is ultramarine and the pink vermilion, both mixed with lead white. Linear motifs painted in lead white on St Matthew’s arm and leg indicate highlighted areas. They exemplify the stylised modelling of drapery practised across Europe in the 11th and 12th centuries, which was ultimately derived from Byzantine painting. 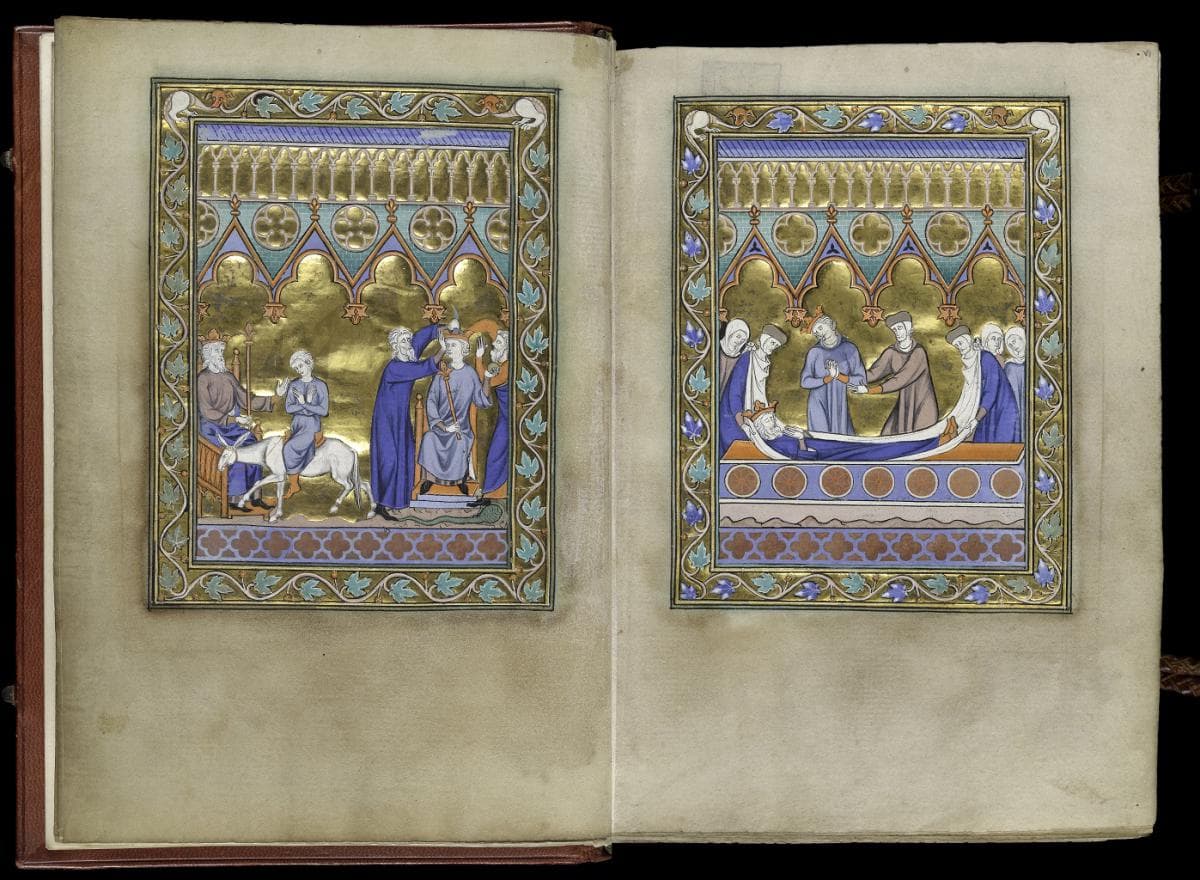 Devout kingship and rightful succession are among the main themes in this royal prayer book. It was made most probably for Isabelle of France (1225-1270), sister of King Louis IX (1226-1270). It is among the earliest examples of the painterly modelling which appeared in Parisian manuscripts of the 1260s. Inspired by sculptures, illuminators used smooth gradations of light and dark colours to simulate highlights and shadows in fabrics. The effect is most pronounced in blue draperies and in white ones shaded in blue.

Purchased in 1919 with support from members of Cambridge University 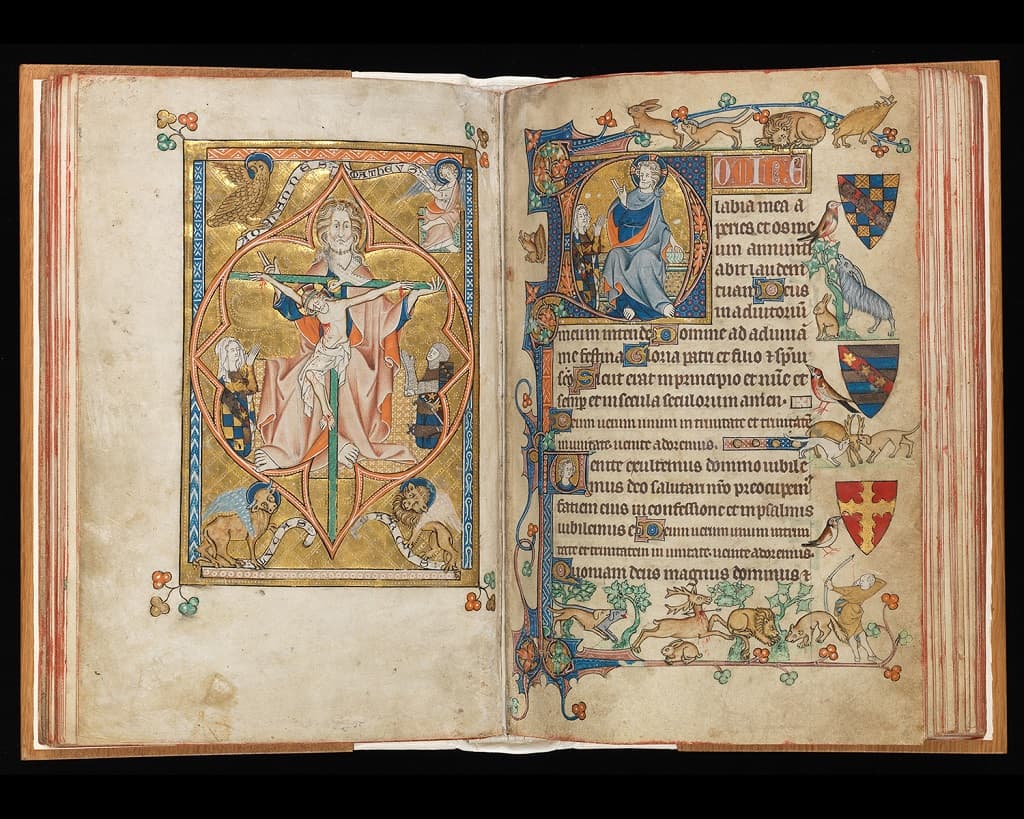 The Trinity and Christ with patrons

Clad in their armorial robes, John de Pabenham (d. 1331) of Bedfordshire and Joan Clifford of Frampton, Gloucestershire, kneel in prayer. This lavish book was probably made for their marriage c.1315. It reveals the development of three-dimensional modelling in English illumination during the early 14th century. The pink garments of God the Father on the left and the grey-blue cloak of Christ on the right show a subtle use of colour. The pale pink and blue base colours define highlighted areas of the drapery, while darker passages indicate deep folds. 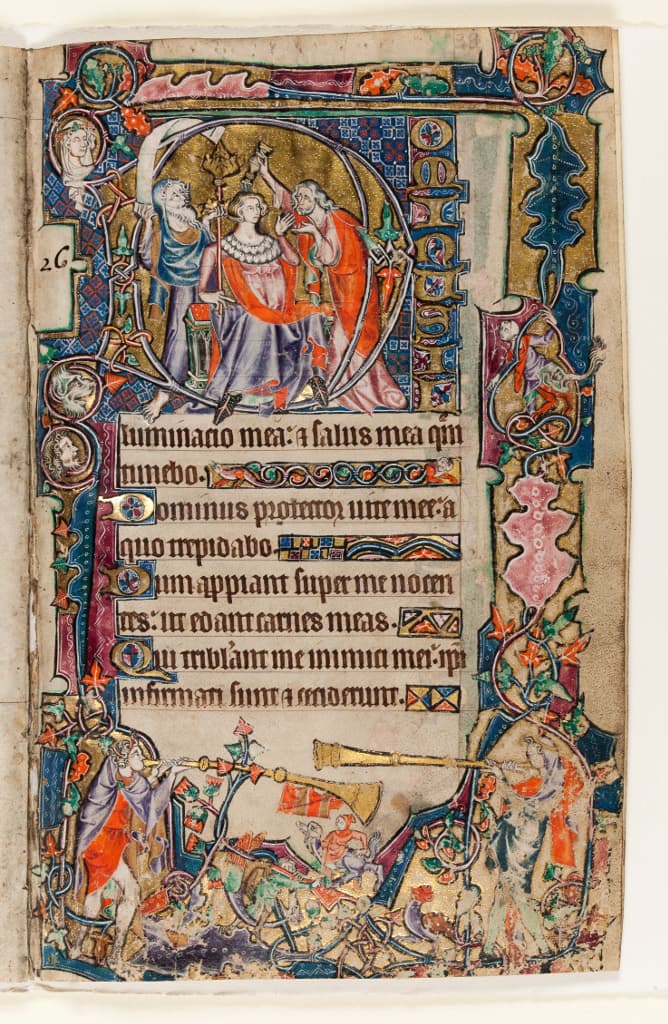 This manuscript exemplifies the most experimental stage in 14th-century English illumination. Blending tradition and innovation, it combines East Anglian peculiarities with London fashions and continental trends. The artist responsible for the figures on this page shows an advanced understanding of painterly modelling, with gradations of colours from shadow to highlight in the purple, blue and pink draperies. His style finds close analogues in the best-preserved medieval English panel painting, the Thornham Parva Retable made in Norwich in the 1330s.

ILLUMINATED: Manuscripts in the Making - the Macclesfield Psalter