Medieval and Renaissance artists could create exquisite images without gold and bright pigments. In fact, the economy of materials underscored their technical skill. Grisaille – painting in shades of grey – first appeared in 12th-century stained glass windows, and later in manuscripts, frescos, altarpieces, silks and enamels. When employed for figures, it sometimes involved minute brush strokes and dots to create the illusion of three-dimensional forms. The finest examples of this pointillist technique are the earliest manuscripts painted in grisaille, made in Paris in the 1320s for members of the French royal family. Grisaille endured in French royal manuscripts and was also favoured in 15th-century Flemish illuminations commissioned by the Burgundian Dukes. Rare elsewhere in Europe, it was reserved for princely patrons – an indication of their sophisticated taste and appreciation for artistic skill. 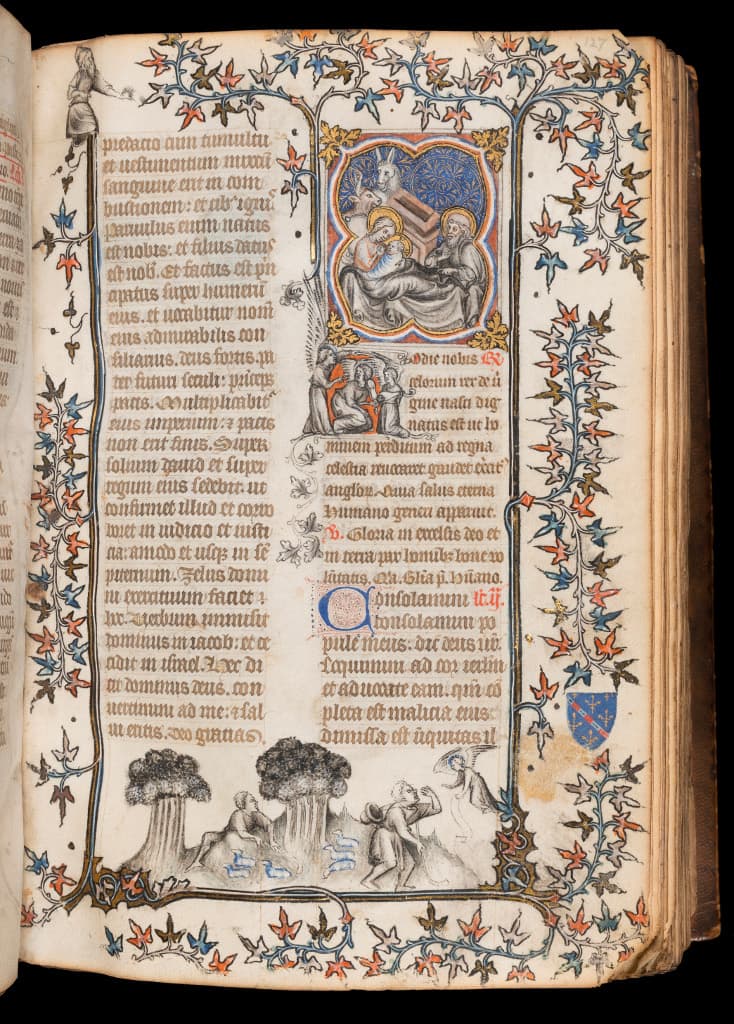 Nativity and Annunciation to the Shepherds
The Breviary of Louis d’Evreux
France, Paris, c.1370
Artist: Master of the Bible of Jean de Sy (active c.1350-1380)

This exquisite Breviary was made for Louis d’Evreux, count of Étampes. He died suddenly on 6 May 1440 while dining with the celebrated bibliophile John, Duke of Berry, who inherited the Breviary and the castle of Étampes. The artist who painted the Breviary’s grisaille images was favoured by John of Berry’s father, King John II of France, and brothers, Charles V of France and Philip the Bold, Duke of Burgundy. He drew inspiration from the foremost Parisian illuminators of the previous two generations who had established a taste for grisaille ¬– especially the pointillist technique seen here – among princely patrons. 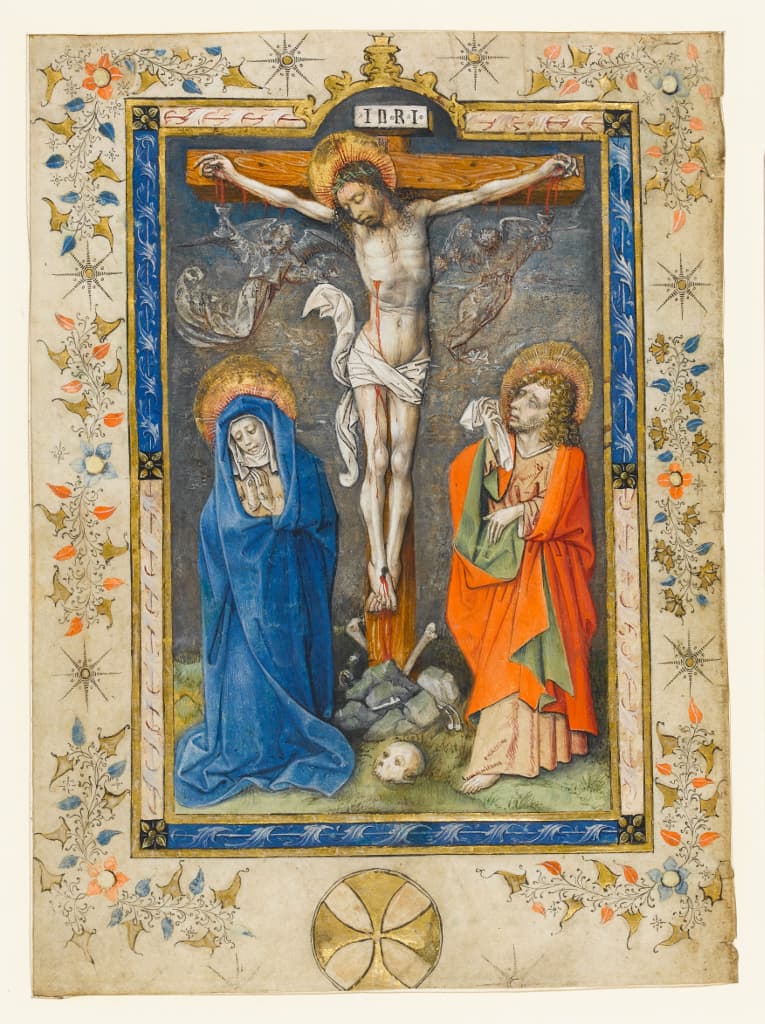 The figures of Christ, St John, and the Virgin are painted in full colour, but the shimmering angels, spiritual ministers from heaven, appear in monochrome, merging into the dark tenebrous sky. Comprised of a base layer of silver leaf over which azurite blue, lead white, and a copper-alloy powder have been painted, the background evokes the darkness that shrouded the earth when Christ died on the cross. A ‘bronze powder’ made of copper-alloy provides the last, faint rays of sunlight. 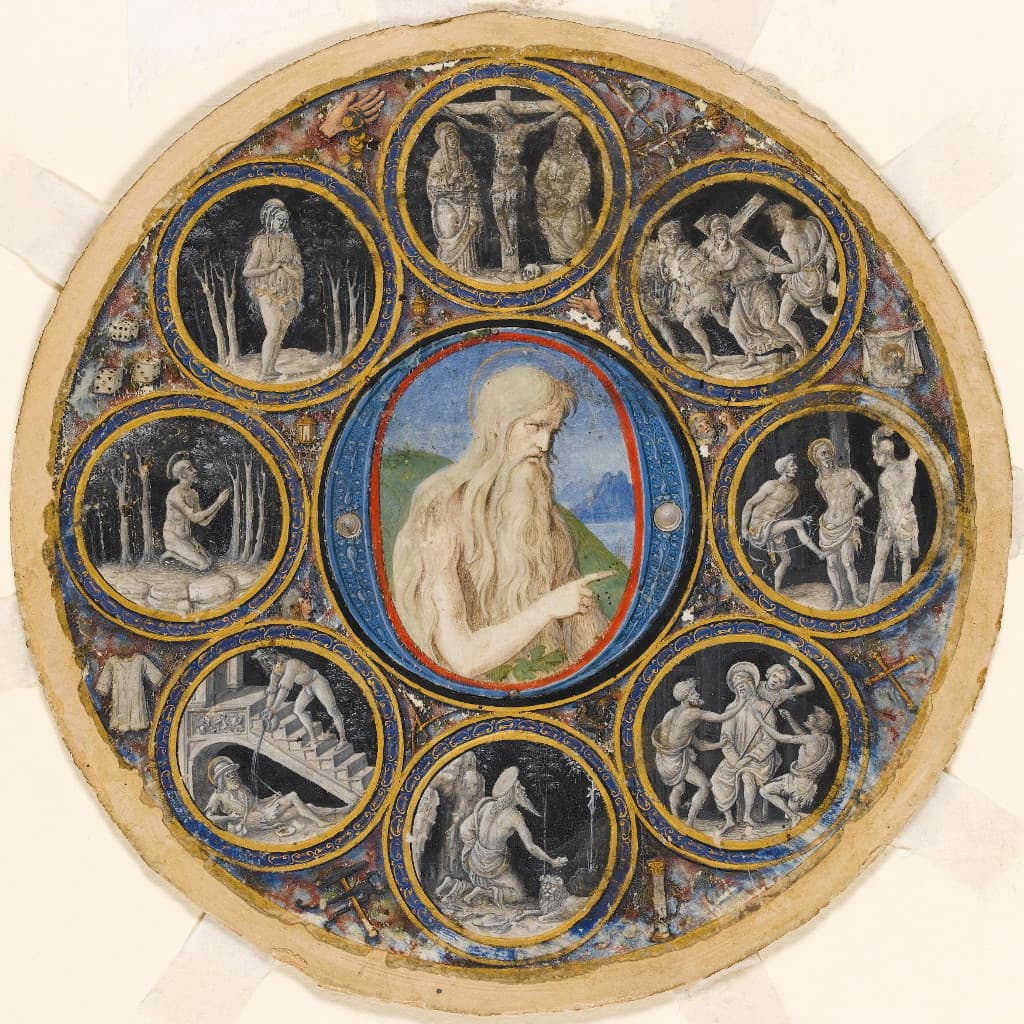 The image of St John the Baptist, excised from a manuscript, has been pasted inside a roundel with eight medallions painted in semi-grisaille. Four of the medallions illustrate Christ’s Passion, the rest depict hermit saints who sought to experience Jesus’ suffering. Instruments of the Passion, alluding to Christ’s pain, loom out of the marbled background. The reduced palette harmonises with the sombre themes. The roundel might have been conceived as an autonomous devotional image.